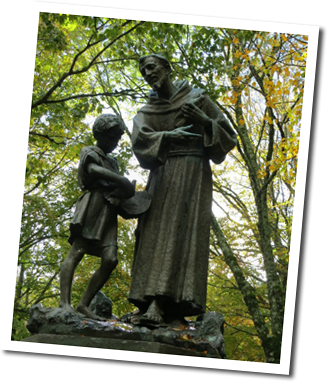 by Ixchel Tucker, Lady of the Rainbow

“Praised be You my Lord with all Your creatures,
especially Sir Brother Sun, Who is the day through whom You give us light. And he is beautiful and radiant with great splendour, Of You Most High, he bears the likeness.

Praised be You, my Lord, through Sister Moon and the stars, In the heavens you have made them bright, precious and fair.”
– Canticle of Brother Sun and Sister Moon of St. Francis of Assisi

In 2001 I had the opportunity to go on my first true Spiritual Adventure, a Ten-Day Pilgrimage with James Twyman that took us for five days to Medjugorje in Bosnia and five days to Assisi, Italy.

I didn’t grow up Catholic, so I knew nothing of Assisi and nothing of Saint Francis, for which Assisi was so well known. Yet, the pilgrimage was not designed for Catholics either, nor any other religious affiliation, it was openly spiritual, for all people seeking a closer connection to the Divine.

The months leading up to the pilgrimage I realized I would like to understand Saint Francis better. I asked myself why I was feeling the call to go on this journey?

What was it about Saint Francis that I might understand or embody?

This simple man represented many things. Deeply connected to nature, he preached to all of God’s creations to simply follow in the teachings of Jesus and walk in his footsteps. Saint Francis was the Patron Saint of the Animals and was witnessed giving sermons to the birds, as well as for taming the terrifying and ferocious wolf.

He believed in peace between people and that war should never be fought over religion. He visited the Sultan in Egypt in the efforts to negotiate peace and end the Crusades.

On World Peace Day, January 1, 1990, the pope said this about him:
“As a friend of the poor who was loved by God’s creatures, Saint Francis invited all of creation – animals, plants, natural forces, even Brother Sun and Sister Moon – to give honor and praise to the Lord. The poor man of Assisi gives us striking witness that when we are at peace with God we are better able to devote ourselves to building up that peace with all creation which is inseparable from peace among all peoples.”

Saint Francis denounced the wealth of his family and the church and became a beggar, giving and receiving of all people. He helped the sick and the poor.

After receiving a vision from Christ and a message to “rebuild his church” he set out to physically rebuild several of the abandoned churches around his home town of Assisi, Italy.

His churches are sanctuaries of sacred space. They are places where one can let go of the outside world and connect more inwardly and deeply with the Divine.

Integrating Saint Francis into my life

As I read more, discovering Saint Francis for myself, I connected to the kind of person he was. I began letting go of the material possessions I had accumulated over the years. I began to look at my possessions in a different light, realizing that they were all temporal, and only useful to make my life more comfortable.

I prayed to learn and integrate these teachings. Just weeks before my trip to Assisi, and following my intuition and guidance, I moved into a home to help care for an elderly couple. I gave away most of my old furniture, not needing it in the small furnished room where I would be staying.

Yet, just two weeks later I realized it was already time to move on and I once again needed furniture. I learned to trust in the Divine. I asked for what I needed to be provided for me, and it quickly was. Soon, my house was furnished again, with everything I needed being donated or given to me.

I learned to let go, that the things we possess can so easily possess us. By trusting the Divine as our source I have never gone without. I have had miracles show up in ways I would never have anticipated. Owning less and having less was one of the most freeing things I had ever experienced in my life.

By the time we left for the pilgrimage, I was ready. The journey, itself, was amazing. We visited the Basilica of Saint Francis and his tomb. We walked through the town and in and out of the small shops. The Italian people were friendly and inviting. We went to the Hermitage and the caves where Saint Francis lived, meditated in the olive groves, and felt the energy of the chapels and churches he restored.

Becoming an Instrument of Peace

I was changed by the experience. Following in the energy of Saint Francis, I came back and helped to organized an interfaith prayer ceremony in Ashland, Oregon. We gathered twelve of the local religious leaders, from Methodist, Jewish, Christian, and Native American, and asked each to share their prayer of peace.

It was a beautiful gathering and I as the people joined together at the end James Twyman sang “The Prayer of Saint Francis”. It is a poem, put to music, which begins with “Dear Lord, make me an instrument of your peace.” I was in tears, realizing I had said that prayer and become that instrument. We all want the same underlying things … peace, love, harmony and joy. And in my small way, I had made this happen.

We have two ways you can explore Saint Francis with us:

“Saint Francis was very aware that all of God’s creation is holy and it all reflects his beauty, truth, and goodness, but Francis appreciated churches especially because he knew that in these sacred spaces people could find and recognize the presence of God’s Spirit more easily than “in the world”. This is why the Little Poor Man of Assisi dedicated a good portion of his life to rebuilding old, abandoned churches like San Damiano where he heard the voice of Jesus Christ, and St. Mary of the Angels of the Little Portion-the Porziuncola.”
– Quoted from The National Shrine of Saint Francis of Assisi, San Francisco, CA

Get to know Saint Francis

Saint Francis never set out to be a saint. In fact, he began by rebelling against the church and its wealth. He simply choose to live a life the way Jesus would live.

You can bring this simple way of living into your life by:

If you are inspired, take action. BE the peace you are looking for. BE the love. BE the vessel and the sacred space. Integrate what you can and are ready for. Do your best, no more and no less. We are all diamonds in the rough, and there will always be time to evolve into what your true soul calls you to be.